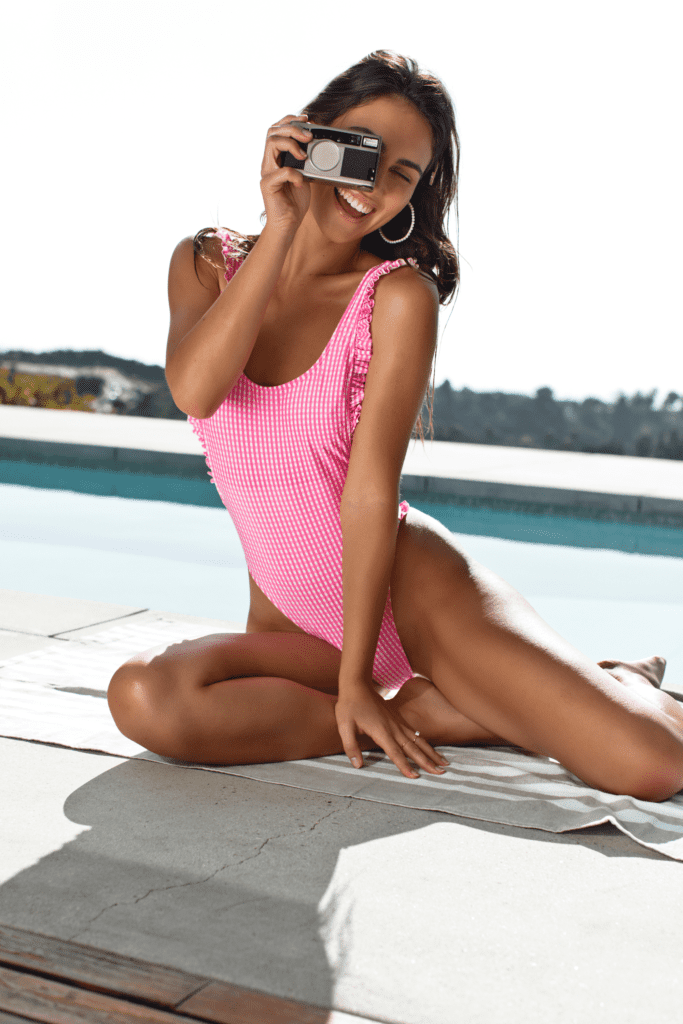 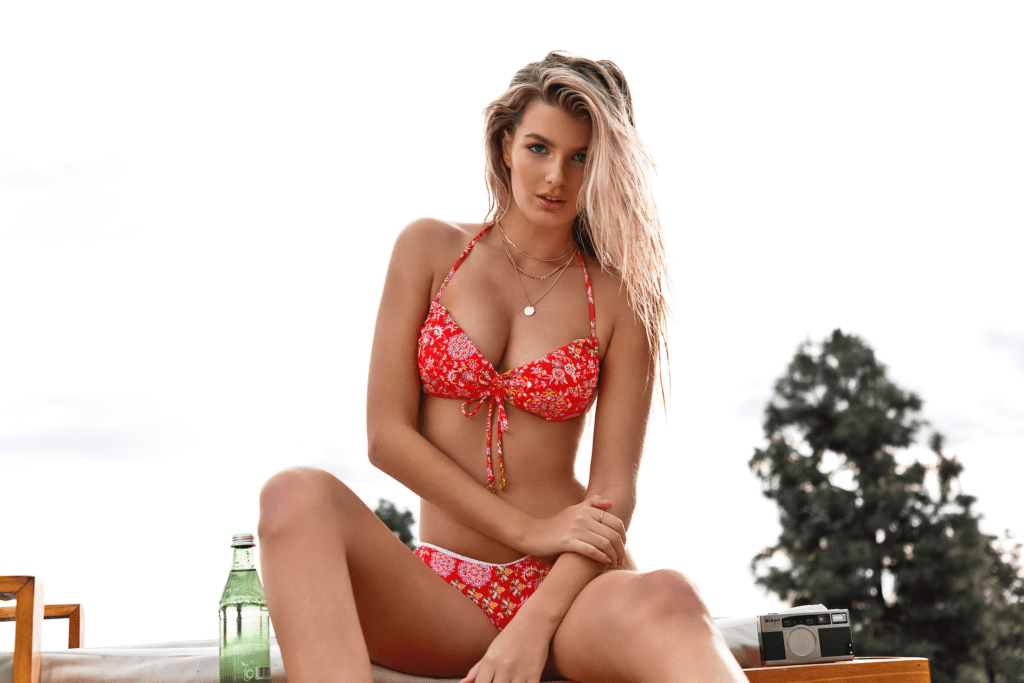 New York Fashion Week is in full swing, having started Monday, February 3,  and going through until Wednesday, Feb 12, 2020. With top designers’ fashion shows in the city, and models strutting around town and between shows in some of the latest fashions, NYFW is always an exciting time.

The new channel reportedly features original content from the biggest names in fashion, as well as the popular content that users have come to expect from the world of YouTube.

YouTube is a global destination for style content since its inception and the platform is looking to foster even more compelling fashion and beauty content. YouTube’s goal is to give people around the world a view into the world of fashion – from backstage at photoshoots to the front rows of fashion week. Derek Blasberg joined YouTube in June 2018 to build out the fashion and beauty department, and collaborate with YouTube creators and the diverse portfolio of fashion and beauty brands.

Launched in May 2005, YouTube (a Google company), allows billions of people to discover, watch, and share originally-created videos. YouTube reaches 1.9 billion people every month, and can be seen in over 80 languages. 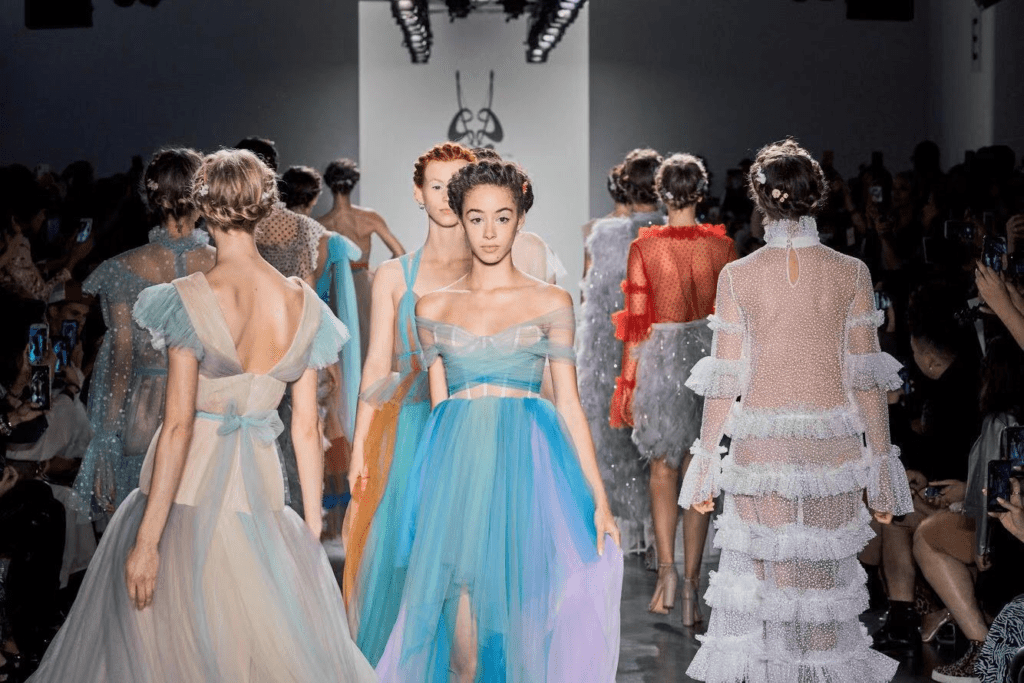 NY Fashion Week was a smash this month, with shows in Manhattan, Brooklyn, and the Bowery Street Subway station by Tom Ford among more. Stars including Rhianna performed, with Miley Cyrus and many other stars in attendance as usual.

Designer Hillary Taymour set up a farmers market for guests, showing her connectivity between sustainable living and fashion.  A former FIDM student, she reportedly made 300 handbags between classes on the LA campus.

Any cool fashion has always been reflective of liberal views. NY Fashion Week this year–like recent years prior since the current administration, have been overtly more political, and this year, even more reflective of multi-ethnic models of all sizes and gender.

Sienna’s SS20 collection was inspired by the belief that meteorology and mythology are deeply connected, an elemental symbiosis in multiple civilizations. The visual beauty and powerful forces of weather and climate have long been suggestive both of what is divine and what is evil. In her forthcoming collection, Sienna Li seeks to manifest this connection in the realm of fashion, exploring a juxtaposition of those opposing concepts–divinity and evil–shaped by the multifaceted natural beauty of meteorologic phenomena.

Unlike her previous collections featuring lace and embroidered or printed fabric, Sienna used mostly tulles for her latest creations, utilizing multiple couture-making techniques such as hand-pleating, draping, and Sienna’s unique fabric manipulation, among more. The implementation of extensive handwork creates a sense of liquidity, inspired by and echoing the ever-changing patterns of weather and climate. The hand-pleated textures give life to the garments and suggest vivid movement, such as wind blowing over the surface of water or clouds shifting and changing over time.

Blended hues reflect the colors of the sky: white and black standing for day and night and mixed colors representing the colors of dawn, dusk, a sunny day, storm clouds, etc. The colors and silhouettes are also symbolic to the designer of the opposing forces of Good and Evil, rendering the style of this collection to her at once both fairy-tale and gothic. 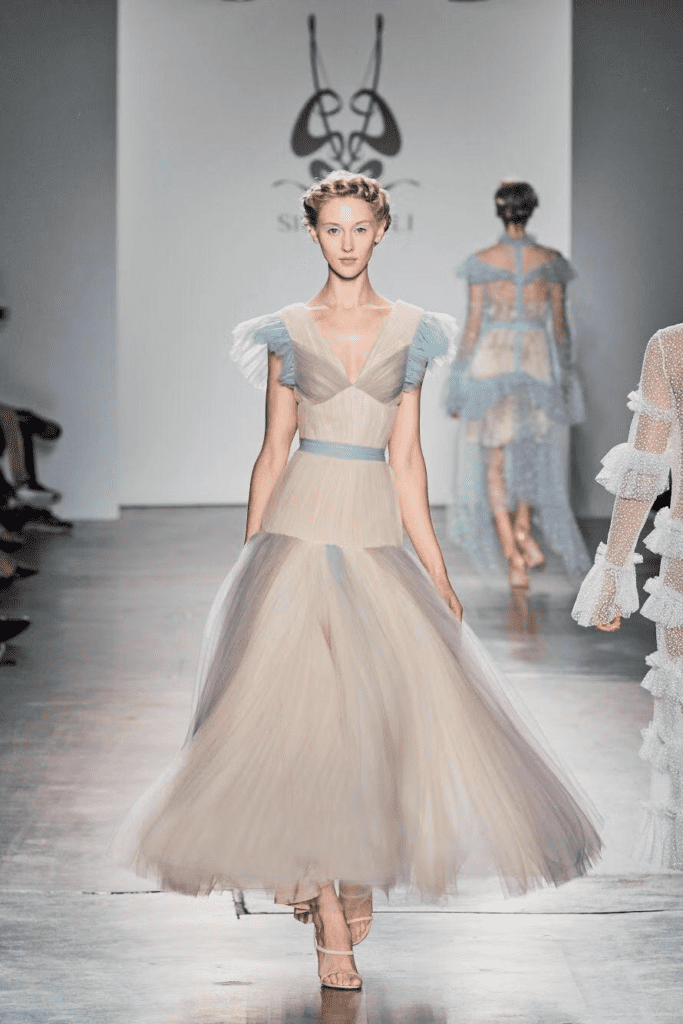 Distinct from many of her designer peers, Sienna’s creative philosophy evolved from her knowledge and experiences beyond fashion. In China, she earned a Bachelor’s Degree in Chinese literature, followed by Master’s in English literature conferred in the UK. Her early studies of narrative accomplishment provided her with a sophisticated, romantic, and creative perspective not merely in writing, but pertaining also to art and fashion. Upon graduation, Sienna worked as a full-time journalist in London for China Daily, China’s largest English-language newspaper, where she interviewed a distinguished array of talented artists and fashion designers who eventually inspired her, in terms of personal passion, to switch gears to the fashion track.

“Fashion is not completely alien to literature. My life has changed from reading and writing to seeing and making,” Sienna explains. “Practical techniques were altered to a different field. Essentially, however, there’s no big difference between the two fields as humanity and as art.”

Bearing this passion in her heart, not long after winding down her journalistic responsibilities, Sienna was accepted by Central Saint Martins before enrolling in Parsons New School of Design. Her unique educational background has provided her with proficiency in design, patternmaking, and manufacturing. She refined her expertise and business sense employed later by the renowned design studio operated by Jason Wu and Johnathan Cohen.

Sienna describes herself as someone who stubbornly sticks to what she’s drawn to and who retains full integrity in her own spiritual realm. The way she focuses on design is the same as she used to be in literature. As fast-paced as the ever-changing world of fashion can be, Sienna’s designs she says always however,  pursues timeless beauty.

“Fashion may seem to be one of the most fancy industries, but running a successful business in fashion can be as cutthroat as any competitive industry, if not more.” Sienna noted. “And for me, I have the same challenges faced by any entrepreneur. The challenge is to run my company as a promising business without sacrificing the collections from being artistically creative. Multi-tasking is my best friend.”

The Sienna Couture line engages and influences women who wish to present themselves in the most elegant light, striking yet subtly beautiful, whether at a gala or on a red carpet. Yet Sienna knows that haute couture is never for everyone, thus her Sienna Li Epic line was born—a sister brand attuned more to daily-wear occasions and more affordable. 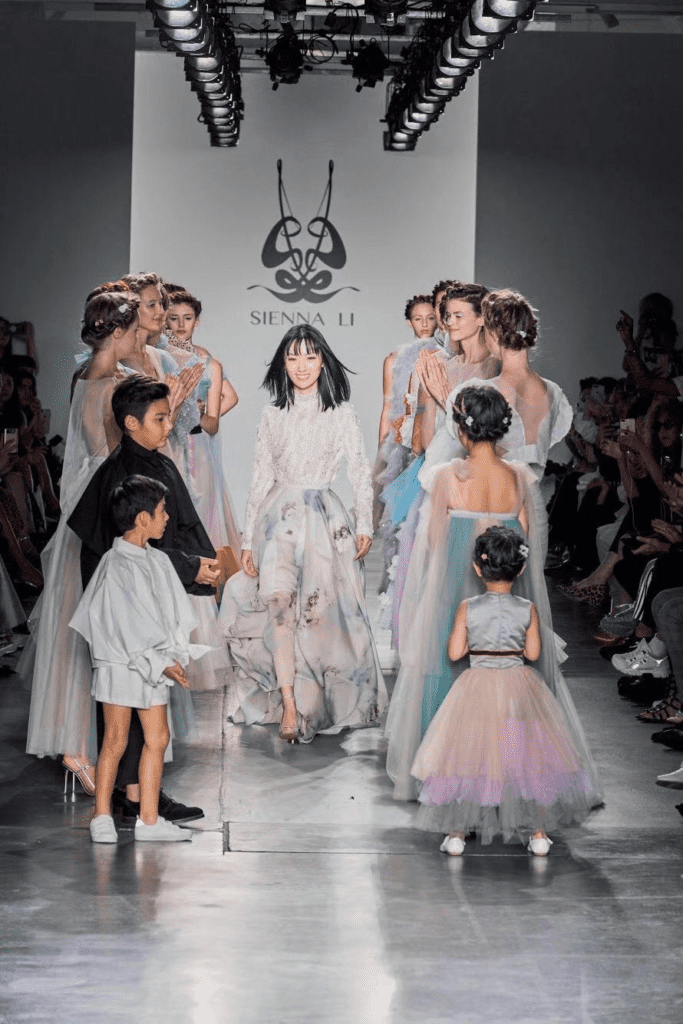 “Haute couture is always a luxury that few can afford, and I don’t want that—so I hope Sienna Li Epic will bring true and affordable fashion into more people’s lives, and more aspiring women like myself can feel and touch fashion every day. That’s my dream.”

The new line of Sienna Li Epic will hit the market very soon—by the end of 2019.

Merel Zoet; one of our favorite new models this year has had a busy season; walking for all from Vera Wang, Louis Vuitton, Oscar de la Renta, and Dolce & Gabbana among more. With a dynamite and diverse look, Merel looks just as great brunette, as she does blonde. We look forward to seeing more from her soon. 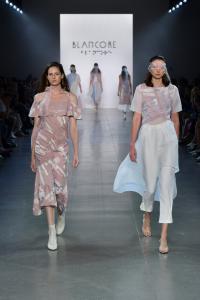 Marie Claire China publisher Xiaodong Zhang, also in attendance, said of the show “This is a very sophisticated, well-developed collection for such a young brand, I look forward to seeing how they will grow.”

Blancore’s inspiration for SS20 is “water” in all its life-forms. Ethereal music heralded the exotic opening sequence, with three performers in white bodysuits appearing through the smoky haze as lighting lent a rippling blue pool in the middle of the runway. 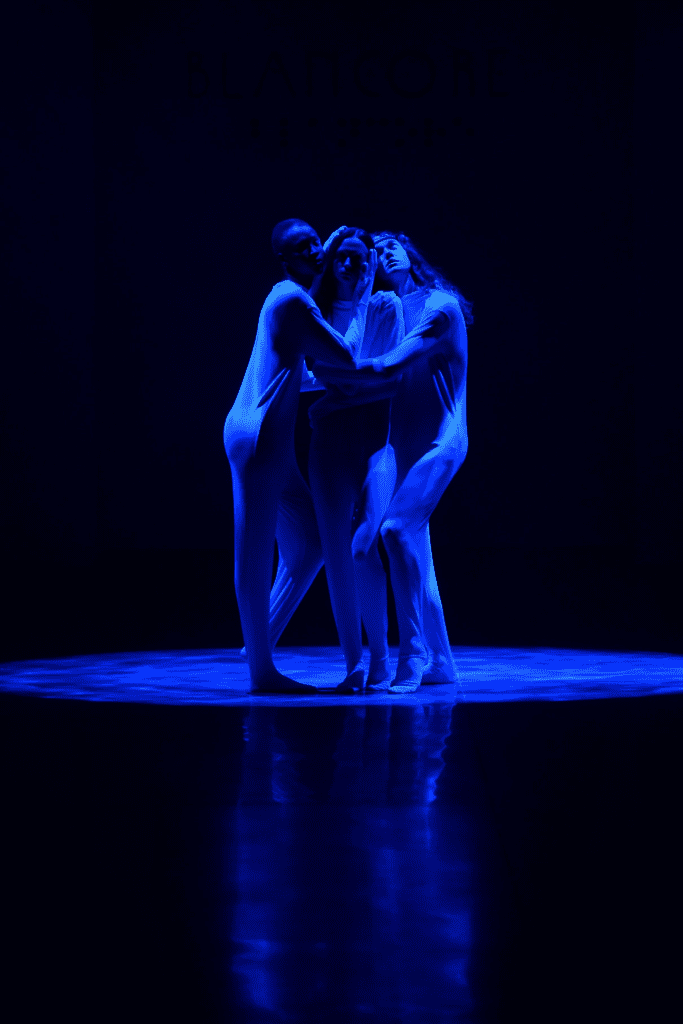 Blancore believes water defines the existence of every creature, infusing everything in every realm with vitality, representing limitless possibility everywhere.

Yalan was born to a family that had always cherished and prioritized fabrics and clothing. From a young age, she kept a close eye on the fashion kingdom her father had forged. Creating a brand, in fact, was already Yalan’s dream at the age of seven. Growing up in the fashion industry, surrounded by its complexities, intricacies, and rewards, Yalan was focused and particular from the start in her quest to identify a brand that could make her heart blossom. Her studies with American scholars and her passionate pursuit of art and art history inspired Yalan to establish a brand in the United States rather than participate in the management of the family business. Thus Blancore was born.

Exceptionally skilled at sourcing inspiration from her own experiences and her perceptions of life’s details, Yalan and her line integrate business-management acumen with a sensitive feel for contemporary design. Graduated from Ohio State University, the young founder combined American style and minimalism with elegantly fine French “deconstruction,” applying both these  to her design creations for men and women.

“We chose New York Fashion Week for our debut not only because Blancore was born here, but also because New York is unique in many ways—especially in the way that it embraces all colors of people and all walks of lives in its arms.”—said Youting, CMO of Blancore.

To date, Blancore’s monthly sales revenue has reached $100k, and the company is now gearing up for opening its first multi-purpose showroom in lower Manhattan. This summer, Blancore opened its first franchise store in a top-tier shopping mall in Chengdu–one of Western China’s most populous cities–and inked deals with more than 30 showrooms worldwide.

Blancore describes the Spring/Summer 2020 debut as its tribute to American fashion. “We believe that with the international influence and resources New York Fashion Week offers, Blancore will have exponential growth after our debut here,” said CEO Linfei.

Within the next three to five years, Blancore, now with offices in Milan and Shanghai, plans to enter 34 capital cities in China, with at least 50 stores opening in the Chinese mainland. It will also break into the markets of Canada, Japan, South Korea, Italy, the UK, France, Spain, as well as Australia, opening stores, working with established showrooms, and distribution channels in all these regions.

This textual content is (c) 2019, Hollywood Sentinel. Images used with permission courtesy of the designer, all world rights reserved.