No Result
View All Result
Home Letter From The Editor

Child Sex Abuse Gets the Spotlight at The Oscars 2016 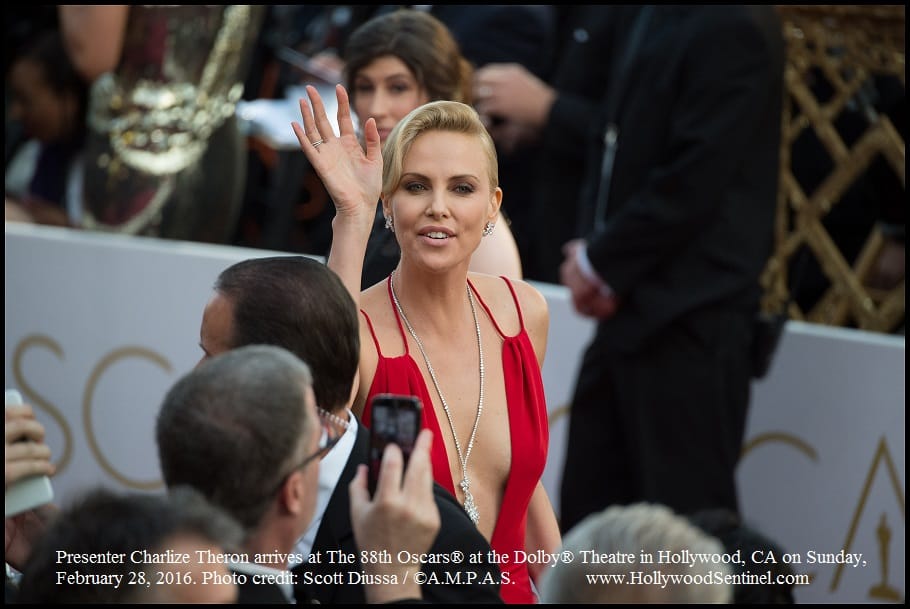 The beautiful and sexy Charlize Theron, always looking amazing, lands our front page here again this year,  as Presenter for The 88th Oscars® at the Dolby® Theatre in Hollywood, CA on Sunday, February 28, 2016.

Welcome to the new issue of The Hollywood Sentinel! The Hollywood Sentinel is the only free entertainment site that reports ‘only’ the good news, that is read by some of the biggest stars on the planet. With exclusive interviews with the stars, and covering all areas of the arts, The Hollywood Sentinel brings to the world each Monday, with breaking ‘daily news,’ its message of power, education, and spiritual messages, that is not mere political taglines, but rather, our way of life. Be sure to check out our daily Oscar coverage on our various pages. Congratulations to all of the Oscar nominees, and winners!

Child sexual abuse has gotten the SPOTLIGHT in a big way this year, with the films win for BEST PICTURE.  The Hollywood Sentinel would like to the Thank The Academy for recognizing the importance of putting child sex abuse at the forefront of the minds of the world, with this brave, and landmark decision in acknowledging the importance of this film.

Winning Best Picture for the Oscar, The film Spotlight’s acceptance   speech was given by the films’ producers; Michael Sugar, Steve Golin, Nicole Rocklin and Blye Pagon Faust, with an excerpt as follows;

MICHAEL SUGAR stated,  “Thank you, hello everybody. I love you, Lauren, we did it. This film gave a voice to survivors, and this Oscar amplifies that voice which we hope will become a choir that will resonate all the way to the Vatican. Pope Francis, it’s time to protect the children and restore the faith. Thank you very much.” Amen!

BLYE PAGON FAUST stated, “We would not be here today without the heroic efforts of our reporters. Not only do they effect global change, but they absolutely show us the necessity for investigative journalism.”  Thank you to that.

The filmmakers further gave a shout out to (…)the  brave survivors of abuse worldwide.

This content is Copyright 2016, The  Academy of Motion Picture Arts and Sciences, A.M.P.A.S.®, all world rights reserved.

Sexy Rooney Mara a Class Act at The Oscars

Also, in this issue, we bring you our exclusive interview with rap star Chill E.B. Chill E.B’s message is vitally important, and in this feature, you will soon learn why. Click the page titled ‘subnormal’ at the table of contents tab to the left to read this story.

Enjoy that, visit the links, read the rest of this site, check back here often, contact us with ‘comments’ that we may choose to possibly publish via the ‘contact’ button at the left of this page, and share this article and site with everyone you know and everyone you are in contact with.

HOSTS ANNOUNCED FOR “THE OSCARS® BACKSTAGE” ON OSCAR.COM

This year’s “The Oscars® Backstage” on Oscar.com, which is the ultimate second screen experience for fans watching the show, will be hosted by a multi-talented group of TV personalities, including actor/writer/producer Orlando Jones, actress and TV personality Diane Mizota, actor Matt Shively, film critic and entertainment reporter Ben Lyons, and entertainment and sports reporter Chris Connelly. The director’s cut from the best of the live backstage cameras will also be available on ABCNews.com, AOL, Comcast Xfinity and Yahoo.

Presented again this year by Samsung, “The Oscars® Backstage” allows fans to choose from four channels that will pull from more than 20 live cameras strategically placed on the red carpet and backstage at the Dolby Theatre®, providing fans with insider views into the most memorable moments of the night. Pre-show channels include: Director’s Cut, Arrivals, Fashion and Red Carpet. During the show, the channels are Director’s Cut (including the popular Thank You cam), Audience, Backstage and Press Rooms.

Jones (“Sleepy Hollow,” “The Devil and the Deep Blue Sea,” “MadTV”) and Access Hollywood Live’s #MyStyleFinds Mizota will host “The Director’s Cut” feeds during both the pre-show and awards telecast. Shively (ABC’s “The Real O’Neal’s”) will report from the fan bleachers on the red carpet with The Players’ Tribune Chief Correspondent Ben Lyons reporting from behind-the-scenes. “Good Morning America” and ESPN contributing editor Chris Connelly is returning as the official greeter of The Oscars red carpet, which includes welcoming nominees, presenters and performers to the show.

Pictured above, Oscar® nominees Leonardo DiCaprio and Sylvester Stallone at the Oscar® Nominees Luncheon in Beverly Hills Monday, February 8, 2016. The 88th Oscars®, hosted by Chris Rock, will air on Sunday, February 28, live on ABC. We’re glad Sly has that name tag on, otherwise we might not know who he is. (Yeah right)!

Are the Oscars Black Enough?

The recent uproar against the Oscars for not having any Oscar nominated stars this year in 2016, is a sign of the cultural sensitivity of our times. I had the pleasure to see in person the head of the Academy of Motion Picture Arts and Sciences– Ms. Cheryl Boone Isaacs, a number of years ago at the Memorial for A.C. Lyles; Paramount Pictures Producer, who was also publicist for the studio at one time, and repped some of the biggest stars of all time including Marilyn Monroe and James Dean among many more. Ms. Boone Isaacs– President of the Academy (who is African American), is a lovely and very intelligent woman, who A.C. always spoke very highly of to me. She and others at the Academy have sadly been the brunt of certain hostilities toward this legendary institution, which fortunately seems to have simmered down.

With that said, The Academy took the heat from Spike Lee (who they recently hired for a job), Will Smith (a regular Oscar presenter), and others, and then decided to make some changes. They then recently announced new policy. Witness;

In a unanimous vote on January 21st, 2016, the Board of Governors of the Academy of Motion Picture Arts and Sciences approved a sweeping series of substantive changes designed to make the Academy’s membership, its governing bodies, and its voting members significantly more diverse. The Board’s goal is to commit to doubling the number of women and diverse members of the Academy by 2020.

“The Academy is going to lead and not wait for the industry to catch up,” said Academy President Cheryl Boone Isaacs. “These new measures regarding governance and voting will have an immediate impact and begin the process of significantly changing our membership composition.”

Beginning later this year, each new member’s voting status will last 10 years, and will be renewed if that new member has been active in motion pictures during that decade. In addition, members will receive lifetime voting rights after three ten-year terms; or if they have won or been nominated for an Academy Award. We will apply these same standards retroactively to current members. In other words, if a current member has not been active in the last 10 years they can still qualify by meeting the other criteria. Those who do not qualify for active status will be moved to emeritus status. Emeritus members do not pay dues but enjoy all the privileges of membership, except voting. This will not affect voting for this year’s Oscars.

At the same time, the Academy will supplement the traditional process in which current members sponsor new members by launching an ambitious, global campaign to identify and recruit qualified new members who represent greater diversity. In order to immediately increase diversity on the Board of Governors, the Academy will establish three new governor seats that will be nominated by the President for three-year terms and confirmed by the Board.

The Academy will also take immediate action to increase diversity by adding new members who are not Governors to its executive and board committees where key decisions about membership and governance are made. This will allow new members an opportunity to become more active in Academy decision-making and help the organization identify and nurture future leaders. Along with Boone Isaacs, the Board’s Membership and Administration Committee, chaired by Academy Governor Phil Robinson, led the efforts to enact these initiatives. (source: The Academy)

As host, Chris Rock’s opening speech ranged from a few mild laughs, to poignant, as he discussed at length his feeling on how ridiculous it was to boycott the Oscars, and how he was glad just to be working in this day and age. Others I spoke with, wondered why other ‘minorities’ have not been the focus of so called ‘diversity,’ such as Native Americans, who were here before us all. This is obviously a broad ranged and touchy subject, which we will not digress here upon now, but will save for a future online ‘radio’ conversation, here at The Hollywood Sentinel .

The 88th Oscars were held on Sunday, February 28, at the Dolby Theatre® at Hollywood & Highland Center® in Hollywood, and were televised live by the ABC Television Network at 7 p.m. ET/4 p.m. PT. The Oscar presentation was also televised live in more than 225 countries and territories worldwide.

This content is copyright, The Hollywood Sentinel, and AMPAS 2016, all world rights reserved.

How to Succeed As A Screenwriter

Life IS Getting Better!