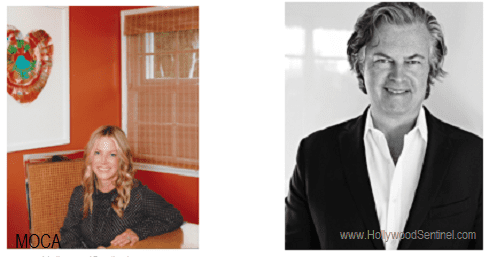 Bell joined the MOCA Board in 2008 and served as co-chair with Johnson from 2009 until her departure from the board in 2014. Johnson joined MOCA’s Board in 2005. He served as co-chair from 2008 to 2013, first with Unterman, then with Bell, and continues to serve as chair emeritus. As co-chairs, Bell and Johnson revitalized MOCA, initiating and leading a campaign that raised over $120 million for MOCA’s endowment.

“Maria and David have been strong and significant members of the Board, and they were at the helm during a very challenging moment. They led MOCA through the storm and into a healthier, more prosperous time. The Museum and the entire Board are very grateful for their dedication, leadership, and hard work. I am happy that the Board acknowledged Maria and David by making them Life Trustees of MOCA,” remarks MOCA co-chair Maurice Marciano.

Maria Arena Bell is a television writer and producer who founded Vitameatavegamin Productions to develop projects for film, television, and new media. She is the Emmy Award-winning former head writer and executive producer of The Young and The Restless, the number-one daytime drama, where she had unprecedented success and led her team to two Writers Guild of America Awards. She has also written essays for T: The New York Times Style Magazine, C Magazine, Aspen Magazine, and many others.

Bell chaired five artist galas for MOCA, working closely with artists Takashi Murakami, Francesco Vezzoli, Doug Aitken, Marina Abramovic, and Rob Pruitt on events that were both financial successes and complete, immersive artworks. She co-chaired the endowment campaign and two director searches at MOCA. She chaired the Americans for the Arts National Arts Awards for over a decade, as vice chair of the board, and received the Legacy Award in 2015 for her extensive work in arts education. Bell also chaired P.S. Arts, an organization that provides art in Title 1 public elementary schools in the Los Angeles area, for five years, then served as president (then president at large) and chaired their signature fundraisers for over a decade.

Bell was appointed to the Los Angeles Cultural Affairs Commission in 2013 by Mayor Antonio Villaraigosa and is a former California State Commissioner on the Commission for the Status of Women and Girls. She recently received the 25th Annual Montblanc de la Culture Arts Patronage Award for her work in education and was inducted into the Newport Harbor High School Hall of Fame in 2015. She is also the recipient of a Women’s Image Network Award for Women in Entertainment and Philanthropy. Bell currently serves on the board of MoMA PS 1 and is on the board of advisors for the Mary and Leigh Block Museum of Art at Northwestern University.

Johnson was a cofounder of Agility Capital, LLC, a venture fund for early-stage companies. He was formerly a senior executive at Metro-Goldwyn-Mayer Inc. (MGM) and a partner of the international law firm White & Case.

Composer and performer Terry Riley is one of the founding fathers of the Minimalist Movement. His landmark composition In C (1964) established Minimalism as a vital force in contemporary music and his work continues to be a major influence today. His career, spanning five decades, far from being confined to the minimalist category, has always crossed boundaries and been marked by its effortless transformations and morphing from one strata of thought to another. Highly developed elements of Indian music, jazz, and African and Middle Eastern music can be heard in intricate melding in much of his work. Terry’s list of collaborators includes La Monte Young, Chet Baker, John Cale, Don Cherry, Krishna Bhatt, Gyan Riley, Stefano Scodanibbio, the Kronos Quartet, the Bang on a Can All Stars, artist Bruce Conner, and poet Michael McClure.

Minimalist composer Terry Riley’s revolutionary 1964 classic In C provided a new concept in musical form, changing the course of 20th-century music. His hypnotic, multilayered, brightly orchestrated improvisations and compositions based on interlocking repetitive patterns set the stage for the prevailing interest in a new tonality, making him one of the most important living composers. Riley has been cited as a major influence by composers Phillip Glass and John Adams, and rock band The Who. During the six-day residency at The Geffen Contemporary at MOCA, running from January 4–9, 2017, Riley improvises solo as part of a series of in-gallery programs focusing on core ideas in the exhibition Doug Aitken: Electric Earth.

Riley will create a series of improvisational performances in dialogue with the multiple moving image installations inside the exhibition Doug Aitken: Electric Earth. In each performance, Riley will use a combination of instruments to explore and respond to the different environments within the exhibition, including the multi-video-channel works migration (empire) (2008) and SONG 1 (2012/2015).

THE MUSEUM OF CONTEMPORARY ART, LOS ANGELES (MOCA)
About MOCA:

Founded in 1979, MOCA’s vision is to be the defining museum of contemporary art. In a relatively short period of time, MOCA has achieved astonishing growth with three Los Angeles locations of architectural renown; a world-class permanent collection of more than 6,800 objects, international in scope and among the finest in the world; hallmark education programs that are widely emulated; award-winning publications that present original scholarship; groundbreaking monographic, touring, and thematic exhibitions of international repute that survey the art of our time; and cutting-edge engagement with modes of new media production.

MOCA is a not-for-profit institution that relies on a variety of funding sources for its activities.

MOCA Pacific Design Center (located at 8687 Melrose Avenue, West Hollywood, CA 90069) is open Tuesday through Friday from 11am to 5pm; Saturday and Sunday from 11am to 6pm; and closed on Monday.

This content is copyright, 2016, MOCA, Hollywood Sentinel, all rights reserved.