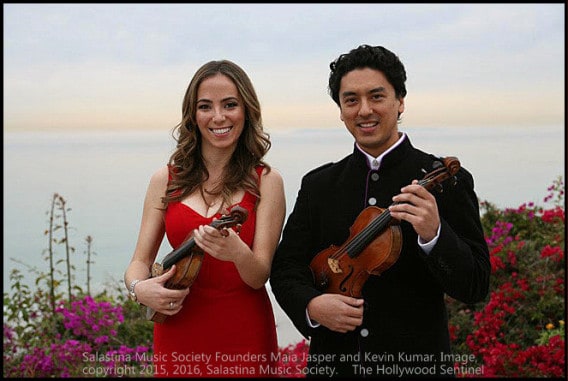 Some speak often of lofty things, while others just make them happen. Such is the latter case of the Salastina Music Society. Headed and co-founded by the incomparable Maia Jasper and Kevin Kumar, the Salastina Music Society brings to the culture of our times, the timeless classical works of the worlds greatest composers, in a quaint, intimate setting, absent of pompousness or pretension. On this relaxed evening, The Hollywood Sentinel had the pleasure to attend the Salastina Music Society special performance of Brahms: Complete String Sextets- Part One, held at the Calvary Presbyterian Church in South Pasadena, California.

A minimalist church, sparsely ornamented, moderately lit, and painted in several neutral Earth tones, filled with a near capacity crowd of predominately older, yet some younger, astute, affluent and educated crowd, were treated to an opening introduction by Brian Lauritzen, the familiar voice to many in Los Angeles, from Classical KUSC’s 91.5FM who took the podium to introduce and host the event, opening the first twenty minutes with a charming back story of Brahms personal life, and anecdotes concerning the radio producers critique of Johannes’ tones, moods, and melodies within his four movements of his string sextet works. A likable personality with a friendly voice, Brian directed the sextet to play segments of each piece as discussed, which proved to be whimsically entertaining, allowing some as I, reminiscence of days back in college during music theory class. 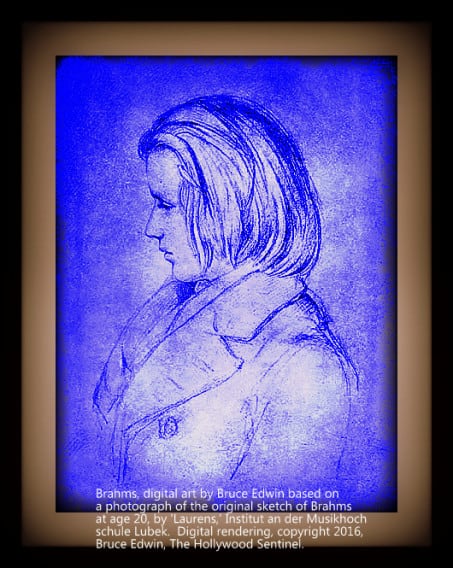 Playing Violin, Maia Jasper (co-founder and co-artistic director of Salastina) has played on scores with Academy Award winning composer Alexandre Desplat (one of my favorites), and Danny Elfman, among others. With honors from Yale, she is a member of the Los Angeles Chamber Orchestra among more. Hailing from Stanford and Columbia University, Salistina Co-founder and co-artistic director Kevin Kumar (violin and viola) has appeared as soloist with the Los Angeles Philharmonic among others. He also has scored works for numerous motion pictures. Merideth Crawford (viola), who also has a BA in English Literature, regularly performs with the Los Angeles Philharmonic among more, while not teaching. Clive Greensmith (cello) has performed with Midori, The London Symphony Orchestra, and London’s Royal Philharmonic Orchestra among others. Peter Myers (cello) has served as musical director for the American Contemporary Ballet, and also played with Midori among others. Hana Hwon Kim (violin) from South Korea, holds a Masters Degree, and began studying in London at the age of 13. She is a member of the Gaia String Quartet in Los Angeles.

Lacking arrogance, the charming, gracious and kind co-founders Maia Jasper and Kevin Kumar thanked the crowd for their attendance, meeting and greeting many of the concert goers after the performance. A brief and casual reception for all followed, served with white wine, strawberries, coffee, tea, chocolates, and other treats.

Lending to a perfect night, The Salastina Music Society delivers concert goers top flight, world class entertainment of the greatest calibre in the world of classical music, in quaint, intimate performances very rare of this great quality. Maia Jasper, Kevin Kumar, Merideth Crawford, Clive Greensmith, Hana Hwon Kim, and Peter Myers are masters of their craft, and seeing and hearing them perform live is captivating, allowing one to momentarily forget all else in the world and become immersed in the greatness of their passion for the music, their expert skill, and the refined taste of their repertoire. Indeed, a must see group for any aficionado or mere curioso of the classical world. For more information on this outstanding group, and for tickets to their upcoming performances in the Southern Californian area, visit their official website here: http://www.salastinasociety.org/

This content is copyright, 2015, 2016, The Hollywood Sentinel / Bruce Edwin, all world rights reserved.