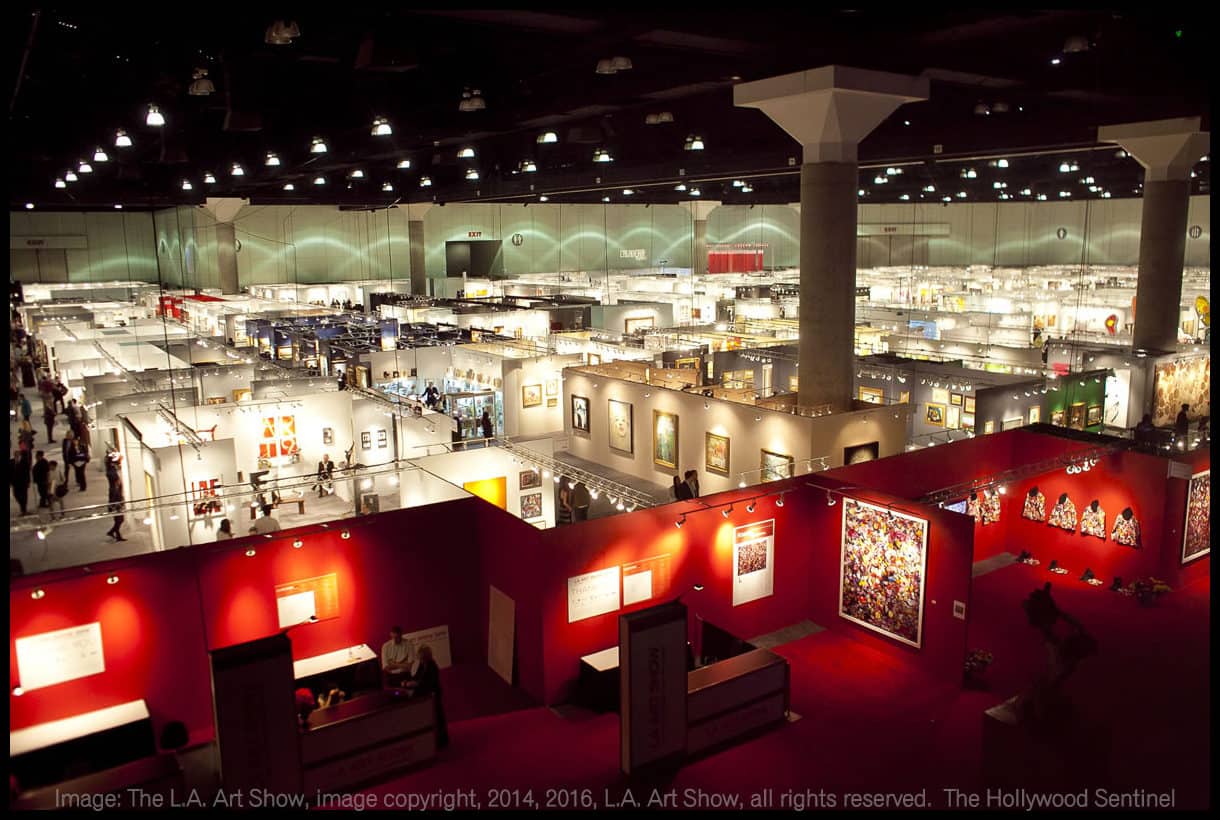 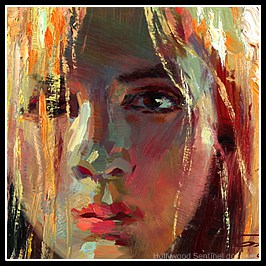 The Los Angeles Art Show was as usual once again, an amazing event. Held once a year in downtown Los Angeles at the Convention Center, this years 2015 show ran for four days, with 120 art galleries from 22 countries around the world, and thousands of pieces of some of the best art work in the world. Master works here were amazing including original paintings by Andy Warhol, van Gogh, Matisse, Monet, Renoir, LaTrec, and more, as well as modern contemporary and emerging artists, illustrators, and sculptors. The VIP Patron Reception was held before the general public attended, which we were at, hosted by the lovely and talented Amy Adams, who I had the pleasure to meet and was as kind, professional, and gracious as could be. The Patron Reception benefited St. Jude Children’s Research Hospital.  Quality food, wine and other beverages were served to all attending patrons, who could buy their choice of many different ethnic options of food and drink, with plenty of seating area to dine during the attendance of the massive show. 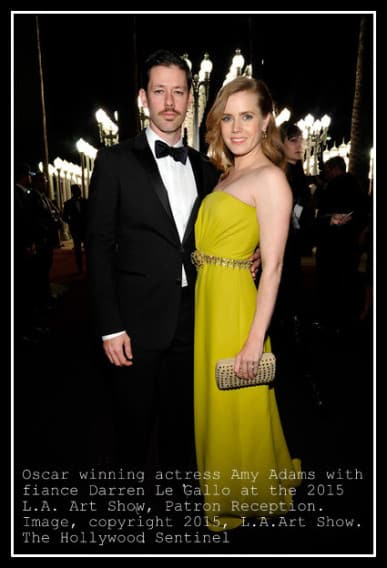 The Fine Art Prints and Art Poster Collection was again held within the art show, and directly connected to the show itself, admittable with the same ticket through a massive hallway resided the Los Angeles Jewelry, Antique, and Design show, housing nearly a hundred booths of fine jewelry, furniture, art, fashion, and antiques on display, and all—like the art adjacent, for sale. 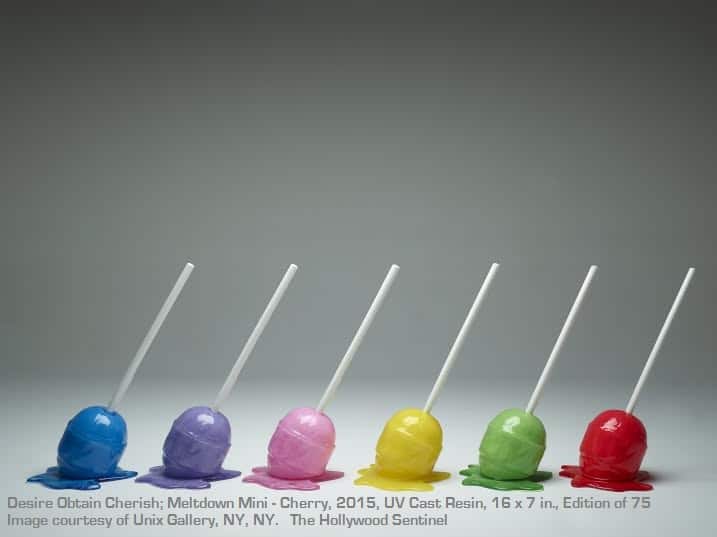 ANDY WARHOL: Shadows
Moca’s legendary show of Andy Warhol’s rare show here ran from September 20th, 2014 to February 2nd, 2015. Andy created these incredible works in 1978 and 1979, based on photographs he took at The Factory. This show included the full collection of paintings from Dia Art Foundation, installed edge to edge, as Andy wanted. Stunning, dreamlike work, Shadows explored the element of light, dark, shadow, and beyond light, darkness, and color, creating flowing ethereal movements of mood, emotion, vibration, and tone with harmonic clarity. Singularly one painting may connote a bell ringing back and forth, or a ghostly form floating off in to the distance, haunting the viewer and its hanging landscape. Together, the forms may suggest a continual movement of light, color and form, flickering through time and space like the shuttering of a film stock winding its way through a camera from nothing to image, to nothing and back again. Vibrant, pop, neon colors washed abruptly against solid blackness, each painting taking on a form of their own and together creating a whole rhythmic movement not unlike an abstract film stopped and blown up for one to see singularly, frame by frame, picture by picture. Shadows was a massive success, and a true honor and pleasure to see. Thank you to MOCA for this wonderful show. What follows below is a clip of Velvet Underground legend Lou Reed discussing the icon. 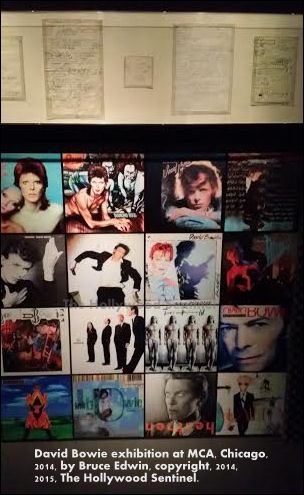 As one of the most important museums in the world, in one of the greatest cities in the world, The Museum of Contemporary Art Chicago brings local, national, and international exhibitions to Chicago in the realm of modern art, performance art, dance, theatre, and music. MCA
has always been one of my favorite spots in my hometown, and has always treated me well. My visit back to Chicago recently was no exception, where I got to see the sold out show of DAVID BOWIE IS. David Bowis is presented the first international exhibition of the career of David Bowie, one of the most pioneering and influential performers of our time.

New Digital Technology Debuts for Audio Guide Tour
Typically, I don’t like acoustic guided headphone tours at museums, as I like to to quietly take in the art and walk away from any crowd, however this exhibition was an exception. The audio tour here, which I played at full blast, was a great, unique, soaring collection of known and rare Bowie tracks that went along with each work, synchronized wherever one walked to each video installation or display. The great success of this utilized the new Sennheiser GuidePORT technology, which mapped trigger unit “identifiers” to play each corresponding, appropriate audio track in full 3D stereo, wherever one would walk near every Bowie ‘display zone.’ This created an intense, trippy, brilliant and rocking atmosphere unique to each viewer depending on where they walked, and always queued to the correct beats and images.

Mods, rockers, new wavers, hippies, art folks, and more crowded this packed show like a rock concert, and while it wasn’t nearly as chaotic and clustered as the King Tut exhibition I saw, it was still crowded. The show here was filled with rare costumes Bowie wore on stage, rare videos, handwritten lyrics by Bowie, hand drawn sketches of his concepts for stage performances, concerts, videos, album covers, and more, and numerous rare works of black and white, color drawings, and paintings by Bowie which were very well executed and crafted. Also was included a rotating hour or so long film loop of many of Bowie’s film clips that he has been in, reminding us that he is also an actor who has had some significant and strong performances. Influenced by Japanese Kabuki theatre, German Expressionism, West End Musicals, Brechtian theatre, Surrealism, New Wave, Punk, and more, Bowie is a visionary​, genius masterful artist o​f​ multiple disciplines. I have grown up always loving his music, and this great show proved to myself and other fans alike, why his relevance is even beyond what we already know and love. The following is a video of David Bowie’s legendary song “Andy Warhol” about the artist.