The Goddess Aurora has a beautiful new song out, “Animal.” Her tour kicks off soon and she will be in Los Angeles next month at The Fonda!  Old school fans of Kate Bush and The Cranberries will love this brilliant, amazing, phenomenal artist who channels the spirit with her elegant and hauntingly beautiful voice, dance, and essence.

“Our goal was to make songs that are true to us, without hiding behind any kind of façade. We worked really hard and went through a thousand different emotions in the process,” states Broods’ Georgia Nott, “The fact that we can feel so many different emotions and still make something that’s so true to us—to me that’s the most important part of this whole experience and we’re so excited to finally share this album with the world.”

Next month, the band will embark on their North American headlining tour. Kicking off on March 26 in Santa Ana, CA, the tour will bring the band through Los Angeles, Seattle, Chicago, Boston, New York City and more.

Wallows first video and single from “Nothing Happens” titled “Are You Bored Yet? (feat. Clairo)  is an amusing video, and outstanding song, that will be sure to find it’s way onto our very discriminatory playlist.

The band will be kicking of a North American tour this month before heading over to Europe.

The beautiful and talented Kimbra is back with a cool new single. The song certainly deserves a great music video, and Kimbra herself deserves much more attention.

Kacey Musgraves is yet another beautiful singer with a lovely voice, perfectly on key and a sweet tone and pitch. “Love is a Wild Thing” here is an outstanding song, reminding of the country-rock crossover appeal of early Jewel.

Due to overwhelming demand, the multiple GRAMMY award-winning singer/songwriter has added 17 new North American shows to her sold-out Oh, What a World: Tour. Following her previously announced tour dates, Kacey will hit the summer festival circuit, becoming the first-ever female country artist to play Coachella, and will then launch the second North American leg of her tour on August 24th.

The Love You Down III fest featuring Swimm and Warpaint kicks of this Thursday and Friday at Echoplex in Hollywood. The advertising for the show was somewhat confusing, initially not totally clear if Warpaint were playing or not. It appears they are. We last saw Warpaint  (with a huge thanks to Columbia) opening for Depeche Mode, were amazing.

Listening to Warpaint is kind of like stepping into a magnificent church or temple. You need to stop everything else you are doing, be present, and prepare for your spirit to be lifted.

Also Thursday night,  MØ returns for an LA gig. We first saw her at Glass House, then the El Rey, which were amazing. This week, she plays The Wiltern.  Her new single “Blur” below with Foster the People, as well as the rest of her new album Forever Neverland, is truly brilliant.

The brilliant and beautiful Grimes dropped a new single late last year, and it brilliantly shows her industrial rock roots. Having noted Skinny Puppy as an influence before, “We Appreciate Power”  shows industrial fans what we already knew; Grimes rocks.

Another great new artist we love–Poppy, is getting more and more trippy with each release. In the brilliant “Play Destroy,” she joined Grimes for this searing masterpiece.

Check back on this page later this week for more new content including the Hollywood Calendar. 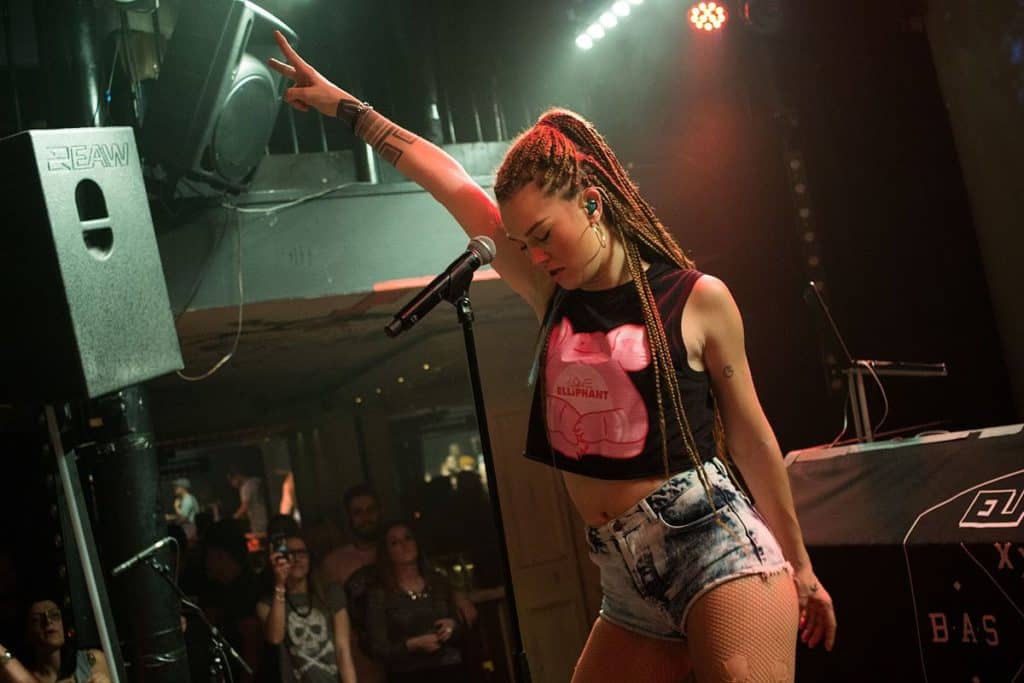 Ranked by subnormal as one of the Top 10 Best New Artists of Our Time; Elliphant is none other than the lovely Ellinor Miranda Salome Olovsdotter, from Sweden.  Having worked with a number of the top DJ / producers in the world including Diplo and Skrillex, Elliphant has also done brilliant collaborations with  fellow Swede Tove Lo, and Denmark’s MØ, among others.

As one of the most brilliant songwriters of our time, with a stunningly distinct voice unlike any other, Elliphant has created hit after underground hit (and at times–mainstream hit), from the legendary “Spoon Me,” “Look Like You Love it,” “Love me Badder,” “North Star,” “Best People in the World,” “Where is Home,” “Could it Be,” “Down On Life,” “One More” with MØ, “Live till I Die,” “Music Is Life,” “Stardust,” “Ciant Hear It,” “Where is my Mama At,” “Only Getting Younger,” “Revolusion,” “Hit and Run,” “Paint the World,” and many more.

The greatness of so many of one artist’s song’s alone is phenomenal, demonstrating the brilliance of Elliphant’s songwriting ability. Combined with her musical production employed, and her dynamic, great voice that ranges from a jazzy, soulful pop, to a melodic rap or reggae beat, lends itself to making Elliphant in a class and league all her own.

With influences of punk, rock, pop, new wave, rap, trap, EDM, techno, house, breakbeat, reggae, grime, and more, Elliphant’s talent is undeniable, and her originality like few of our time; a brilliant and legendary artist of sheer greatness.

a work in progress

fb below; not to be followed by losers or fascists.

Pop will Eat Itself

Fields of the Nephilim

Alexandre Desplat won the Oscar for Best Original Score for “The Shape of Water.”   He stated on stage, ” ” Merci, c’est fantastique. I’m very grateful to the Academy. My mother is also turning 90 this year so I think she’d be very happy tonight. She’s Greek, by the way. Now, Guillermo, thank you.

Thank you for letting the music be the voice of your characters and convey the beautiful melancholy of love. That’s for you. I wish to thank Miles Dale, Fox Searchlight and the music department at Fox. All the musicians who played on the score and those downstairs here. I wish to thank Queen Renée Fleming, Laura Engel, Ray Costa, my friend Katz. And Solrey, you elevate my music, everything I write, by your musical genius, thank you. But this is not for you, it is for our daughters, Ninon and Antonia.”