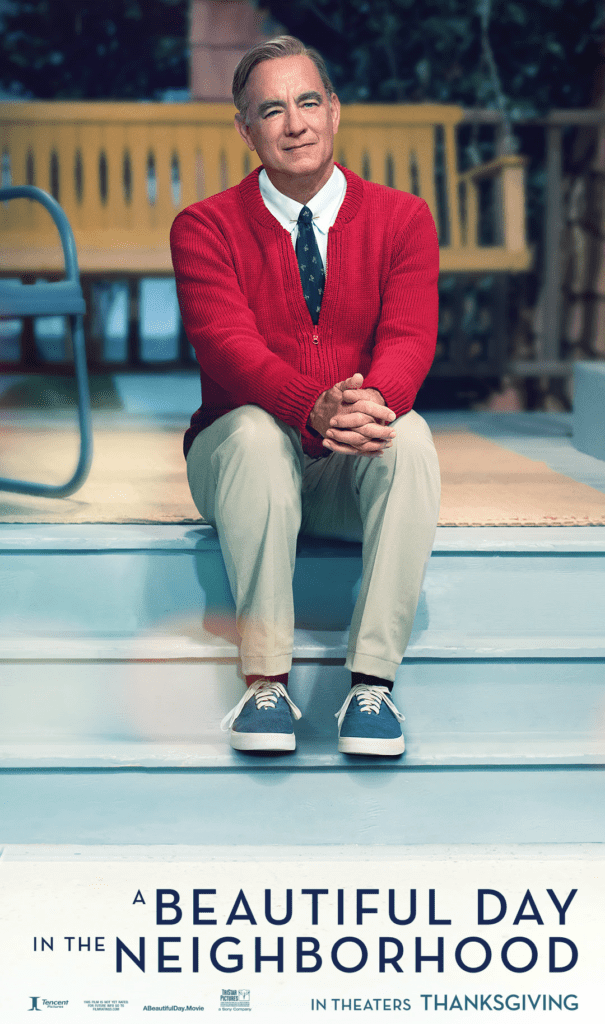 A BEAUTIFUL DAY IN THE NEIGHBORHOOD;  In Theaters November 22, 2019. Tom Hanks portrays Mister Rogers in the drama of “A Beautiful Day in the Neighborhood,” a timely story of kindness triumphing over cynicism, based on the true story of a real-life friendship between Fred Rogers and journalist Tom Junod. After a jaded magazine writer (Emmy winner Matthew Rhys) is assigned a profile of Fred Rogers, he overcomes his skepticism, learning about empathy, kindness, and decency from America’s most beloved neighbor. Directed By: Marielle Heller. Written by: Micah Fitzerman-Blue & Noah Harpster. Inspired by the article “Can You Say. . . Hero?” by Tom Junod. Produced By:  Youree Henley, Peter Saraf, Marc Turtletaub, and Leah Holzer. Cast: Tom Hanks, Matthew Rhys, Susan Kelechi Watson, and Chris Cooper. Image, (c) 2019, Sony, Columbia, Tri-Star, used with kind courtesy. All world rights reserved.

Soulless Hollywood and the Bad People in It

I recently met someone who supposedly follows the so-called “law of attraction.”  Yet one of the first things she said to me was to criticize “Hollywood,” and in their words, all of the “soulless, terrible people in it.”

What exactly is Hollywood? In reality, Hollywood is one of over 100 neighborhoods in Los Angeles with a population of around 85,000 people. According to the Los Angeles Times, the median income for Hollywood proper residents is around $34,000 per year.

West Hollywood, an actually incorporated city, has a population of around 37,000, and an average annual income of around $67,000.  Are these the people this person was attacking, and that so many others thoughtlessly, automatically attack? No.

When most people think of Hollywood, they think of the entertainment industry. And more particularly, the music industry and even more so, the motion picture industry.

There is not one person in civilization who has not been affected by the entertainment industry, whether it be radio, music,  movies, TV, or today, motion picture on the internet.

When people refer to Hollywood however, they often refer to all of mass media, including the news, radio, magazines, and newspapers. While indeed Hollywood, and to be more accurate–Los Angeles–is the media capitol of the world, it is obviously, not the only place where mass media is created.

Those that work in Hollywood; the entertainment industry, often get maligned by those who do not work in our industry, just as this supposedly enlightened woman I encountered, so callously spoke.

With an average of 600 movies made per year, and nearly 500 TV shows made last year, “Hollywood” is a multi-billion dollar per year industry, that employs people around the world. In addition to adding to the economy, the motion picture industry gives entertainment, happiness, and pleasure to literally billions of people–with the help of the internet; around the world.

According to the Bureau of Labor and Statistics, there are around 400,000 people working in the motion picture industry. Think of that; just under a half a million women and men; most of who have dreamed, trained, struggled, and finally made their dreams come true of working on a creative field they love so much.

From the hair and make up person, the film editor, sound designer, wardrobe designer, set designer, writer, producer, actor, actress, casting director, special effects artist, fine artist, and even the set construction crew, transportation crew, and more, Hollywood is filled with both skilled and creative labor and talent from many areas of industry and the creative arts.

Hollywood is made and kept alive not only by its audience, but by the creative artists who struggle, work, and make manifest their labor, creative vision, and dreams every day. Many work 12, 14, or more hours a day, 6 or 7 days a week. When the film or show is wrapped, most are unemployed, and go back to hustle and try do it all over again.

Hollywood is not a thing or a place to hate. Instead, Hollywood is more like a state of mind of an artist, and the manifestation of the artists work in the biggest of ways.

To hate that; to hate Hollywood, and to call us all soulless, bad, or evil, is not only foolish and immature, it is dangerous and reckless. It is feeding the same biased, stereotypical, hateful propaganda used by certain alt-right media and alt-right politicians to degrade and denigrate an entire group of people–the artists of the world. It is to contribute to the very degradation of a society that Hollywood simply, largely reflects.

Hollywood is a rich, beautiful, exciting place filled with dreamers, believers, and creators who MAKE their dreams happen. It is a place where the artists of the world dream of coming to, and some do, to share their dreams and talents with the world. It is a place not to hate and scorn, but to celebrate. Because ultimately, Hollywood is the land of artists. It is the land where, as Dorothy said in the Wizard of Oz, “Dreams DO come true.”

May YOUR dreams come true, and may you enjoy this new issue of The Hollywood Sentinel.