The beautiful and talented Zendaya appears below as seen at Kids’ Choice Awards Nickelodeon 2018, in a pretty prom gown, seen below. 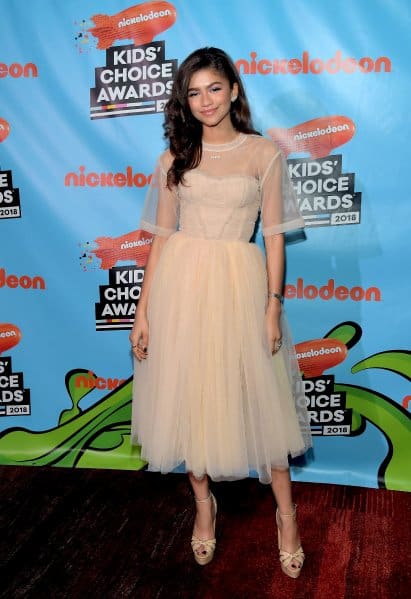 This textual content is copyright 2018, Hollywood Sentinel. Images, with kind Courtesy of Nickelodeon.

This year’s festivities included Cena running through the “Upslime Down Room,” “Black Panther’s” dressing room and the wrestling ring, before slamming onto the KCA stage. Cena then performed the dances–the Swish Swish; The Rolex and Mic Drop–with social media star Backpack Kid and kid dancers.

During the show, chart-topping band N.E.R.D. performed their hit, “Lemon,” with a crew of kid dancers on top of a cafeteria table. Nickelodeon and social media star JoJo Siwa also took the stage with a medley of her hits “Kid in a Candy Store,” “Hold the Drama” and “Boomerang,” before getting doused with green slime.

The 2018 Kids’ Choice Awards proved to be it’s usual slime-fest: from Heidi Klum and Mel B getting slime-soaked on a swing set while presenting an award; to Favorite Funny YouTube Creator winner Liza Koshy getting a surprise double sliming at the podium and backstage; to Henry Danger star Jace Norman pranking Shawn Mendes with buckets of green slime after winning Favorite Male Artist; and Cena closing the show with an epic finale sliming of the audience after receiving the ultimate dousing himself.

This year’s show expanded voting to kids at home with an interactive digital experience. Kids had the opportunity to choose what happens live during the show by casting votes to determine the outcome of multiple stunts including: Black-ish star Marsai Martin wearing “Guac Socks” in a game of “Eat It or Wear It,” and social media stars Alex Wassabi and LaurDIY taking on the “Fear Box” challenge.

In addition to the live votes, Nick’s digital platforms offered a second screen experience that included real-time play-alongs, interactive polls that paid off within the show and exclusive real-time updates with photos and videos from the orange carpet and backstage. From Facebook to Snapchat, Nickelodeon’s social channels captured all of the best snaps, memes, GIFs, videos and pics from the night. Fans can go to Nick.com or the Nick App to relive all of their favorite show moments by watching video highlights from the live show and flipping through live event pictures.

Nickelodeon, now in its 37th year, has built a diverse, global business by putting kids first in everything it does, ranking as the #1 kids program. The company includes television programming and production in the United States and around the world, plus consumer products, online, recreation, books and feature films. Nickelodeon’s U.S. television network is seen in more than 90 million households and has been the number-one-rated basic cable network for 20 consecutive years.