One of the most brilliant artists on the planet today, the stunning GRIMES is back again with a bit of ultra VIOLENCE.  Don’t make mother nature and the women mad guys, unless you want some more hurricanes tearing down your doors.

satan on the Outside Looking In

POPPY is back with more MK ultra style brainwashing, death-worshipping, and Barbie meets satan, discussing things not fit to print here.  She has truly run off into dangerous territory and now there seems to be no turning back for the lost blonde-lamb gradually being led to the slaughter before her cult-programmed fans.  We won’t show you that downward spiral here; but instead, some TRUTH.

$atan has found his-her way into the grocery business this month. We will never be a good android, and you will NOT see us swiping our butts, foreheads, wrists, or hands at Whole Foods / Amazon for a 666 purchases in this or any other lifetime.

It seems the Amazon owned Whole Foods is rumored to be rolling out testing check-out scanning with palm prints, where customers swipe their hands.

LA-based singer and songwriter Annika Rose has shared the music video for her debut single “In The End” (TaP Records), directed by Danica Kleinknecht.  Annika states, “Filming this video was a really special experience as it’s something that I’ve wanted to do since I was a kid, It was amazing to have it finally come to fruition and help tell the story of my first single.”

Subnormal states, “Annika reminds us a bit of early Alanis Morissette.  With a beautiful look, a beautiful voice, and an outstanding vocal range, and at just 17 years old, she is definitely one to watch out for. ”

Another young new LA artist; Delacey has released a moody new single. With a mature, rich voice, Delacey has a strong career ahead of her.

While Delacey has continued to release new music this summer including “The Subway Song” and “Emily,” her debut single, “My Man” has continued to climb the charts and is currently #33 at Top 40 Radio in the US.

Originally from Orange County, Delacey started writing songs and playing piano at age seven while idolizing artists including Stevie Nicks and Billie Holiday.  She has co-written songs including Halsey’s “Without Me,” which topped the Billboard Hot 100 chart, as well as songs for Demi Lovato, Zara Larsson, and The Chainsmokers, among more.

After debuting her MAGDALENE show in May – twigs’ first live shows in nearly three years – FKA twigs announces nine additional North American dates on her headlining MAGDALENE tour. The North American leg of the tour begins November 3rd in Vancouver, making stops in major cities across the U.S. and Canada including LA, Denver, Chicago, Boston, and Brooklyn (see a full list of tour dates below). 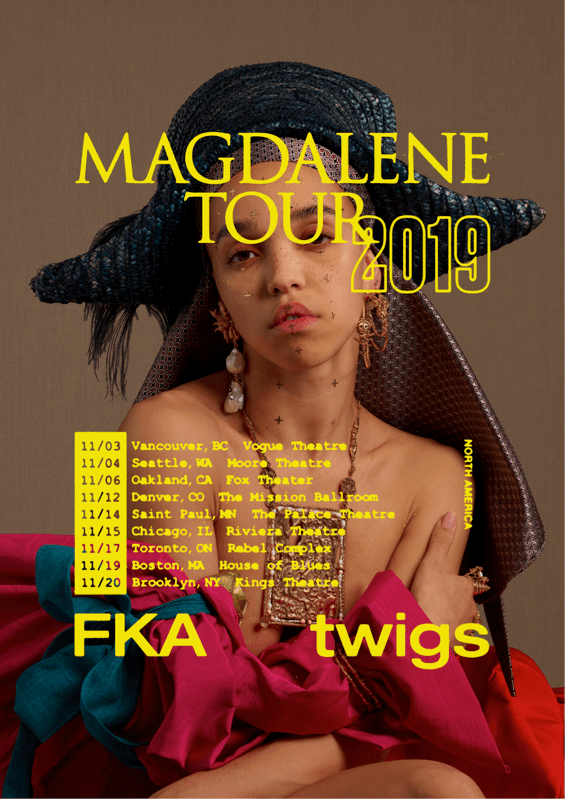 MAGDALENE weaves a tapestry of sound, performance, costume, pole dancing, Wushu, set design and lighting. Inspired by the revolutionary 19th century concept of ‘Gesamtkunstwerk,’ or ‘total work of art,’ it is a complete experience. FKA twigs summons all that she has – technical mastery, creative brilliance and physical endurance – to transport her audience into a stunning artistic realm.

FKA twigs launched her MAGDALENE world tour with two sold-out nights each at LA’s Palace Theatre and NYC’s Park Avenue Armory, continuing on to play headlining shows in Berlin, London, and Sydney, and performing at Primavera Sound, We Love Green Festival, and Afropunk.

Subnormal magazine states “FKA twigs legendary video for her new song “Cellophane” below, subverts the ‘male-gaze’ and the degrading / predictable role of the female recording artist as ‘stripper-sex object-whore,’ to that of ‘elevated angel-woman-mother of all creation-and goddess incarnate.’  A true filmic masterpiece of visual work, and a stunning near a cappella delivery by Tahliah (FKA twigs) here, whose ethereal voice harkens to Julie Cruise’s work with David Lynch.  Reportedly citing “Germfree Adolescents” by X-Ray Spex as her favourite album of all time, and reportedly mentioning Siouxsie Sioux as an inspiration, FKA twigs is truly outstanding.”

In the news: Some pop star got married. Like we care. Politicians are being idiots. What’s new?

If you are reading this and don’t believe in global warming or climate change, you need to stop reading this NOW and go back to kindergarten.

The Center for Biological Diversity and allies sued the Office of Surface Mining Reclamation and Enforcement and the U.S. Fish and Wildlife Service this week for failing to protect endangered species from coal mining in Appalachia in violation of the Endangered Species Act.

Pollution, razing forests and blasting is pushing aquatic animals to the brink of extinction due to heavy political interference from the Trump administration, the organization states.

“Trump appointees have enabled a rubber-stamp system allowing mountains to be blown up and streams to be polluted without protection for endangered species or the human communities of Appalachia,” said Tierra Curry, a senior scientist at the Center. “It’s illegal and immoral and it needs to stop.”

Scientific studies have linked coal mining to declines in birds, fish, salamanders, crayfish, insects and freshwater mussels. More than 1 million acres of hardwood forest and more than 2,000 miles of streams have already been destroyed by surface coal mining in Appalachia.

Mining also threatens nearby communities with air and water pollution and risk of flooding. More than 20 peer-reviewed scientific studies have now linked mining pollution in Appalachia to health problems, including increased risk of disease and birth defects.

There’s a few people we can think of we’d like to throw in here, but of course, we will not as we don’t litter.  We do love the SMELL of the tar here, reminds us of that broken glass, grit, dirt and hot tar burning under I-90 and LSD (Lake Shore Drive) in those hot summer days in Chicago on the way cruising to see Ministry and more.

“Always FREE the 17th Annual TARFEST Celebrates the Art & Music of LA w/ KCRW DJs, Natural History Museum, Second Home & Local Artists.  On  September 14, LA hipsters are invited to dance the day away with a lineup of KCRW DJs, while artists including Johnny KMNDZ Rodriguez and Mr. B Baby paint live murals around the park. In addition to the expanded programming for installation art, the Serpentine Pavilion at Second Home can be experienced for free by everyone who attends the festival.  TARFEST’s longtime partner, the Natural History Museum of LA County, will also be open for FREE all day, allowing attendees to flow freely from art and music to immersion in geological history.”

ANNA UDDENBERG: PRIVÉ
Through December 1 at Marciano Art Foundation: Privé, the first solo show in Los Angeles and first institutional show in the United States by the Berlin-based Swedish artist Anna Uddenberg, is currently on view in MAF’s Lounge Gallery. Through the lens of the feedback loop that is social media, Uddenberg analyzes systems of representation, the performativity of femme expressions and its cross-connection to consumer culture and gender studies. Her interest in femme as figuration is geared towards exploring power dynamics in the service domain, and disputes the idea of femininity by revealing what happens when these roles are amplified and over-performed to a degree of uncanny absurdity.

19, The Broad will debut a new survey of internationally renowned artist Shirin Neshat’s approximately 30-year career. Shirin Neshat: I Will Greet the Sun Again presents over 230 photographs and eight immersive video installations, offering a rare glimpse into the evolution of Neshat’s artistic journey as she explores topics of exile, displacement, and identity with beauty, dynamic formal invention, and poetic grace. The exhibition features the global debut of Land of Dreams, an ambitious new project encompassing a body of photographs and two videos, and includes her early photograph series, Women of Allah (1993-97), iconic video works such as Rapture (1999), Turbulent (1998), and Passage (2001), and monumental photography installations including The Book of Kings (2012) and The Home of My Eyes (2015).

All videos are owned and copyrighted by their respective artists and labels, used with kind courtesy of the artists, labels, or publicists. This pages textual content ONLY is anti-copyright 2019, if re-printing, must provide link back to this site or you will be taken blindfolded to Area 51 to never return.