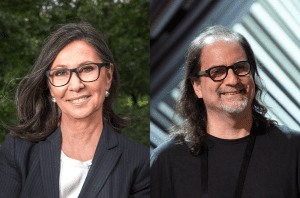 “Donna and Glenn will infuse new energy and vision into this 91st awards presentation, and we are excited about a broad-based creative relationship with these two artists,” said Bailey.

“I’m grateful to the Academy and ABC for entrusting me with this very special opportunity,” said Gigliotti. “I’m sure it will prove to be a humbling, exhilarating and completely unique experience. Thankfully, I will have Glenn Weiss by my side every step of the way!”

“I’m so looking forward to being back to help celebrate and honor the film industry and all the talented people behind this year’s movies,” said Weiss. “And I am ‘co-excited’ to be co-producing this year’s show with Donna Gigliotti!”

“We’re thrilled to work with someone as passionate about the Academy as Donna Gigliotti—an Oscar winner and multiple nominee. She and (the now famous) Glenn Weiss are committed to making the most of the innovations we’ve embraced for our 91st Oscars,” said Academy CEO Dawn Hudson.

“Donna Gigliotti has worked on some of the most celebrated films of our time and is uniquely qualified to bring her talent to the most anticipated awards show of the year,” said Channing Dungey, president, ABC Entertainment. “And, thanks to Glenn Weiss, we just experienced the most talked-about moment at the Emmys with his heartfelt onstage wedding proposal. We can’t wait to see how they top that at The Oscars.”

Gigliotti won a Best Picture Oscar for “Shakespeare in Love” and earned nominations for “Hidden Figures,” “Silver Linings Playbook” and “The Reader.” Her other producing credits include such features as “The Fundamentals of Caring,” “Beasts of No Nation,” “Two Lovers,” “The Good Night” and “Emma.” The films she has produced and overseen have earned a total of 43 Oscar nominations.
Returning to direct his fourth consecutive Oscars, Weiss has won 14 Primetime Emmy Awards, including one earlier this year for the 90th Oscars. He has directed and produced numerous televised events, including 18 Tony Awards® shows. His other directing credits include “The Kennedy Center Honors,” “Billboard Music Awards,” “BET Awards,” “Peter Pan Live!,” “Dick Clark’s Primetime New Year’s Rockin’ Eve with Ryan Seacrest,” “Primetime Emmy Awards,” “Live from Lincoln Center,” “Macy’s 4th of July Fireworks Spectacular,” “Garth Brooks, Live from Las Vegas” and the “American Music Awards.”

The Academy of Motion Picture Arts and Sciences is a global community of more than 9,000 of the most accomplished artists, filmmakers and executives working in film. In addition to celebrating and recognizing excellence in filmmaking through the Oscars, the Academy supports a wide range of initiatives to promote the art and science of the movies, including public programming, educational outreach and the upcoming Academy Museum of Motion Pictures, which is under construction in Los Angeles.