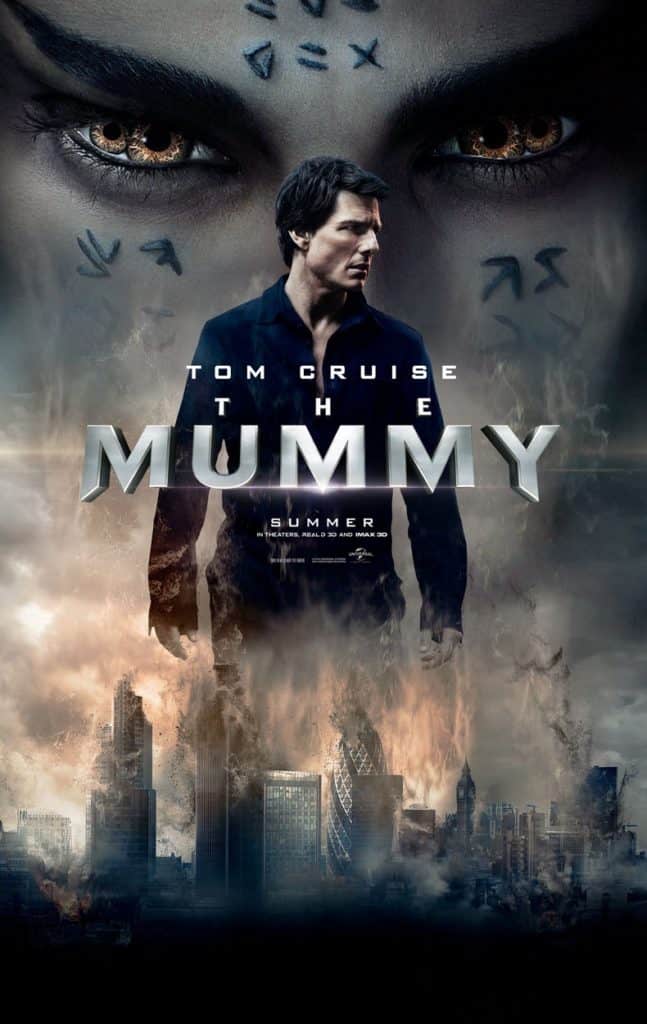 Tom Cruise headlines a spectacular, all-new cinematic version of the legend that has fascinated cultures all over the world since the dawn of civilization: The Mummy.

Thought safely entombed in a tomb deep beneath the unforgiving desert, an ancient princess (Sofia Boutella of Kingsman: The Secret Service and Star Trek Beyond) whose destiny was unjustly taken from her is awakened in our current day, bringing with her malevolence grown over millennia and terrors that defy human comprehension.

From the sweeping sands of the Middle East through hidden labyrinths under modern-day London, The Mummy brings a surprising intensity and balance of wonder and thrills in an imaginative new take that ushers in a new world of gods and monsters.

The creative team is led by director/producer Alex Kurtzman and producer Chris Morgan, who have been instrumental in growing some of the most successful franchises of the past several years—with Kurtzman writing or producing entries in the Transformers, Star Trek and Mission: Impossible series, and Morgan being the narrative engineer of the Fast & Furious saga as it has experienced explosive growth from its third chapter on. Sean Daniel, who produced the most recent Mummy trilogy, and Sarah Bradshaw (Maleficent) produce alongside Kurtzman and Morgan.

Over the course of his career, Cruise has dedicated himself to accomplishing ever-more ambitious practical stunts, ones that would test the most seasoned stunt performer. His goal is to place the audience right next to his characters…in every single frame captured by the camera.

In the Mission: Impossible series, Cruise free-climbed the Burj Khalifa (world’s tallest building), gripped the outside of an in-flight transport plane (eight times), made free-water dives of 130 ft., hung from Utah’s jagged Dead Horse Point by his fingertips and leaped from a Triumph Speed Triple motorcycle…only to tackle a co-star mid-flight.

Whether dangling on the 800-ft. edge of Iceland’s Earl’s Peak for Oblivion or slamming his Chevelle into fellow drivers’ cars in Jack Reacher, it’s crucial to the performer that he pushes himself further in each film, and that the audience shares in the adrenaline.
Cruise has long wanted to lens in Zero Gravity, and in The Mummy, one tactical stunt has become his biggest, most demanding maneuver to date. In order to shoot one of the most visceral plane-crash sequences ever filmed, he’d need to take to the skies.

DETAILS OF THE STUNT

Almost four miles above sea level, Cruise, co-star Annabelle Wallis and key crew—all under the eye of The Mummy director/producer Alex Kurtzman—lensed a sequence that is impossible to shoot on land.

Off the coast of France near Bordeaux—over two days and multiple flights—pilots and astronauts of Novespace Airbus (A-310) took the company 20,000 ft. high.

From this altitude, they climbed rapidly to a 50-degree angle to just over 25,000 feet; there, the plane reduced thrust, and free fell from the sky.

For 22-23 seconds during the ballistic phase, the company felt weightless.  As the Airbus free fell, cast and crew balanced dialogue, camerawork and choreography for a plane-crash scene that will appear in summer 2017’s The Mummy.

For the stunt, the pilots enacted a total of 60 parabolas (repeated weightlessness sessions). Each parabola allowed for the filming of a key sequence in the scene.

At least 90% of the plane crash sequence is real. The only visual effects will be added in post-production and blend sets together so they look the same size and scale.

Under the direction of European Space Agency astronaut Jean-Francois Clervoy, crew filmed with Novespace, founder of the first parabolic (Zero Gravity) flights in Europe. The Zero-G Airbus is the only plane in the world manned by three pilots simultaneously: one controls pitch, one controls the wings and one controls thrust.
The “pull-up” phase starts at full thrust and max speed from level flight until a 50-degree incline, before the “injection” phase and beginning of weightless (actual freefall, not floating).

During “pull up,” those aboard feel twice their weight on Earth.
The aircraft is briefly injected into orbit, following an elliptical trajectory above the Earth, so passengers live the true weightlessness that astronauts feel.

The largest single vertical structure ever assembled at the Hollywood & Highland gateway, The Mummy sarcophagus stands almost 75 feet in height, 28 feet in width and weighs an astonishing 15,000 pounds.

The hundreds on hieroglyphics on Ahmanet’s ancient tomb tell the story of betrayal by her people, and their attempts to hold her between this world and the next. To prepare Ahmanet’s sarcophagus for its The Mummy Day revealing, the tomb required 18 wide-load tractor trailers to move all of the elements into place.

As seen in Universal Pictures’ The Mummy, there is a plane-crash sequence in the upcoming film that was shot 90% practically.
The Mummy Zero Gravity Stunt VR Experience goes behind the scenes with Tom Cruise and co-star Annabelle Wallis as they perform the intense Zero G stunt.

Almost four miles above sea level, Cruise, Wallis and key crew—all under the eye of The Mummy director/producer Alex Kurtzman—filmed a sequence that is impossible to shoot on land.  A set was built inside Novespace Airbus (A-310) to make it look like the interior of C-130 military transport aircraft.

This immersive VR experience is enhanced by Positron’s Voyager platform, featuring custom engineering and software, guided 360-degree motion control, head-tracked 3D audio, and haptic integration—allowing guests to experience the world of The Mummy in a way they could only imagine.

In The Mummy Escape Game, an immersive live-action fan experience that also makes its world premiere at The Mummy Day, guests will be recruited as security guards and enter the sweeping story of The Mummy.

They must solve interactive puzzles to save mankind from the revenge of an ancient princess who has awakened in current day.
Ahmanet’s thirst for justice has spanned centuries, and players must outwit the fearless warrior to survive.  Turning the storyline into reality by traveling through multiple rooms, up to 10 players work together within a 60-minute time limit to solve the puzzle and defeat the game.