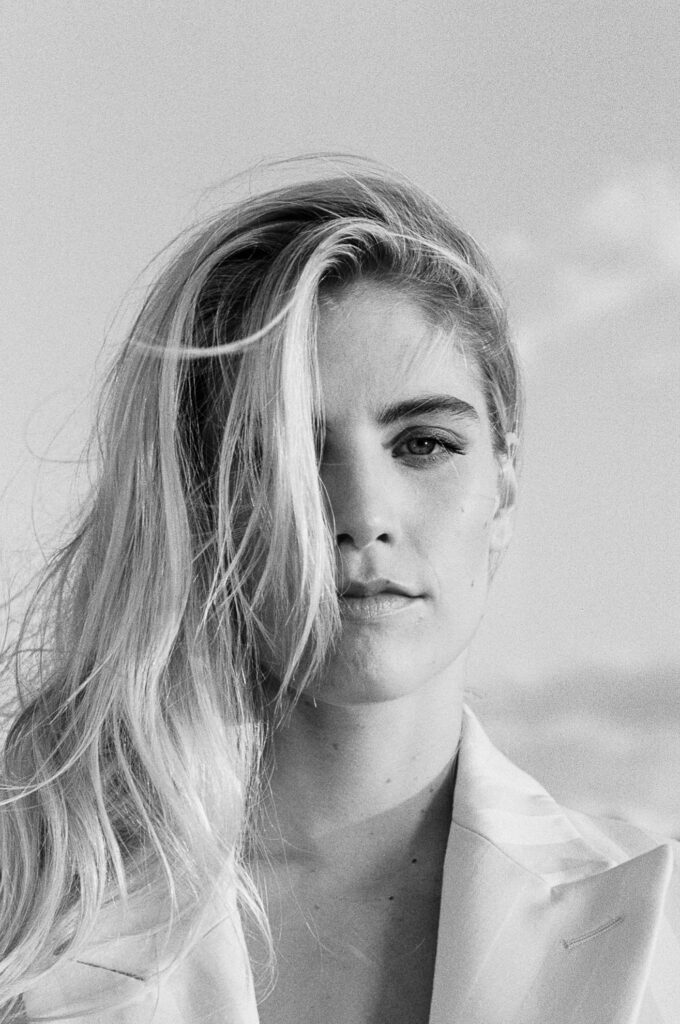 Paradise has returned to Los Angeles and Southern California this month—thankfully. The fires are out, fire season has  winded down, and the smoke is gone.

Granted, the city is still shut down, but at least we have the mountains and the ocean and beautiful weather.  Shutting down nature is not only difficult, its simply cruel, and wholly unnecessary. So we are thankful that we at least have this! We are still missing the concerts, art museums, orchestras, nightclubs, and gyms.   We hope this changes SOON!

During times of turmoil, fear, difficulty, or challenge; music, art, and film can offer us a refuge and a place of healing to get deeper in touch with our spirit, to release our feelings, and to celebrate what we have, and to heal. For this reason among many more, the artists among us ARE essential workers, and important to the very essence of society. The artists of the world are the soul of its culture.  Today, there is no better band to represent that fact than London  Grammar.

One of the most powerful and significant newer bands of our time, critically acclaimed British trio London Grammar recently released a new video for their soaring new single “Baby It’s You”  (Columbia Records). Directed by Oriol Puig, the music video was filmed on location in the forests of Catalonia and is intertwined with 3D generated imagery created by Trizz Studios.  See more with London Grammar in our “Music’s Greatest” page here in this new issue of The Hollywood Sentinel.

If you listen to someone telling you over and over how horrible life is, a part of you is eventually going to start believing them. When you believe you are doomed, you eventually WILL be doomed, because your thoughts will create the circumstances that manifest the reality of what you predominantly think.

A person can fail at life because:

1, someone around them that they personally know is telling them they are going to fail or die

2,  someone from their past has told them this, and their voice is still ringing in their head like a broken record, or

3 this person can even be many people in form of the news media.

Thoughts turn into things. If you feed your mind with toxicity, you will have a toxic life. Whether you pollute your mind with junk food, drugs, or a failing mentality in the form of bad company or bad news, what you reap with the results of your life is what you sow into your mind.

It has never been harder during our time, to avoid bad news and doom and gloom news media.  There is even a new buzzword to describe the activity of this on social media; “Doom Scrolling.”  Much of what is posted on social media is not even accurate or is just a headline from a news story that does not convey the true reality of the story. Many times, mainstream media itself simply does not fact check, copying other news media sources without doing their own investigation. At other times, mainstream media is simply deliberately biased or deceptive, attempting to pass of their politically motivated opinion as fact.

There certainly are plenty of real and valid things to be worried about or get angry about.  In “Alice in Wonderland,” The queen stated she used to find at least six impossible things to believe before breakfast. Today, we can all easily find at least six outrageous things to make us furiously mad or depressed before breakfast—if we watch the mainstream news. However—fear and anger do not serve you. Fear weakens the immune system, and anger does too. Fear and anger actually shorten your life and distract you from your goals.

The stocks for most major, mainstream news outlets have skyrocketed since Covid19 was declared an emergency by President Trump earlier this year. The same media that literally ignored the virus during the first month it was reported in China, later went on a rampage of creating fear and panic, 24 hours a day, 7 days a week, for over half a year.

Instead of telling people how to be calm, relax, and boost their immune system, the mainstream media went on a hell rage of mayhem and death, telling us how millions would be dead (which was false), and how all of us, including healthy individuals, needed to hide in our homes and wait for the savior—big pharma (their source of ad revenue)—to create a vaccine.

In reality, most people will be safe from Covid19. Most people will be healthy and live and not die. But if you  believe most of the local, city, state, and county governments, the World Health Organization, many universities and politicians, and most mainstream media, you will not know that.

Don’t be a sheep and a blind follower of the herd. Think for YOURSELF. Don’t be a victim of propaganda, even if it’s delivered in a meme or post by your friends.

It is not Noble to be a Victim

The mainstream media, now largely an arm of a political agenda, wants to treat you as and portray you as a victim. Let us be clear; it is not noble to be a victim. It is not praiseworthy to fall ill, to be weak, to suffer, or to die. There is no victory in death and no heroic effort in getting sick. Getting sick and dying are easy. You just  believe what the merchants of chaos and doom and gloom tell you. You just give up. Fighting and living is the true worthy goal, and the true noble feat is to live and live strongly and powerfully, with greatness and strength, with fearlessness and grace.

You were not born to take drugs and be another “case” for big pharma. Your body and mind and the “natural world” generally have all you need to be healthy and strong. Trust yourself.

Most people are basically good. America is overall a great country. Most people know it is wrong to destroy art, property, loot, and riot. While there are great political forces fighting for the very soul of this country and world, we can know several things;

Every person of every race, creed, color, ethnicity, age, sex, nationality, and sexual orientation has value.

ALL lives have value.

Censorship is a dangerous thing and is a step towards tyranny.

Goodness is greater than any evil.

Truth wins in the end.

We are blessed with each breath of life to be here.

We must cherish it, and we must fight on and live with power, faith, and forgiveness. Be a victor, and follow your passion, with strength and determination, and never—never give up.

Soulless Hollywood and the Bad People in It

I recently met someone who supposedly follows the so-called “law of attraction.”  Yet one of the first things she said to me was to criticize “Hollywood,” and in their words, all of the “soulless, terrible people in it.”

What exactly is Hollywood? In reality, Hollywood is one of over 100 neighborhoods in Los Angeles with a population of around 85,000 people. According to the Los Angeles Times, the median income for Hollywood proper residents is around $34,000 per year.

West Hollywood, an actually incorporated city, has a population of around 37,000, and an average annual income of around $67,000.  Are these the people this person was attacking, and that so many others thoughtlessly, automatically attack? No.

When most people think of Hollywood, they think of the entertainment industry. And more particularly, the music industry and even more so, the motion picture industry.

There is not one person in civilization who has not been affected by the entertainment industry, whether it be radio, music,  movies, TV, or today, motion picture on the internet.

When people refer to Hollywood however, they often refer to all of mass media, including the news, radio, magazines, and newspapers. While indeed Hollywood, and to be more accurate–Los Angeles–is the media capitol of the world, it is obviously, not the only place where mass media is created.

Those that work in Hollywood; the entertainment industry, often get maligned by those who do not work in our industry, just as this supposedly enlightened woman I encountered, so callously spoke.

With an average of 600 movies made per year, and nearly 500 TV shows made last year, “Hollywood” is a multi-billion dollar per year industry, that employs people around the world. In addition to adding to the economy, the motion picture industry gives entertainment, happiness, and pleasure to literally billions of people–with the help of the internet; around the world.

According to the Bureau of Labor and Statistics, there are around 400,000 people working in the motion picture industry. Think of that; just under a half a million women and men; most of who have dreamed, trained, struggled, and finally made their dreams come true of working on a creative field they love so much.

From the hair and make up person, the film editor, sound designer, wardrobe designer, set designer, writer, producer, actor, actress, casting director, special effects artist, fine artist, and even the set construction crew, transportation crew, and more, Hollywood is filled with both skilled and creative labor and talent from many areas of industry and the creative arts.

Hollywood is made and kept alive not only by its audience, but by the creative artists who struggle, work, and make manifest their labor, creative vision, and dreams every day. Many work 12, 14, or more hours a day, 6 or 7 days a week. When the film or show is wrapped, most are unemployed, and go back to hustle and try do it all over again.

Hollywood is not a thing or a place to hate. Instead, Hollywood is more like a state of mind of an artist, and the manifestation of the artists work in the biggest of ways.

To hate that; to hate Hollywood, and to call us all soulless, bad, or evil, is not only foolish and immature, it is dangerous and reckless. It is feeding the same biased, stereotypical, hateful propaganda used by certain alt-right media and alt-right politicians to degrade and denigrate an entire group of people–the artists of the world. It is to contribute to the very degradation of a society that Hollywood simply, largely reflects.

Hollywood is a rich, beautiful, exciting place filled with dreamers, believers, and creators who MAKE their dreams happen. It is a place where the artists of the world dream of coming to, and some do, to share their dreams and talents with the world. It is a place not to hate and scorn, but to celebrate. Because ultimately, Hollywood is the land of artists. It is the land where, as Dorothy said in the Wizard of Oz, “Dreams DO come true.”

May YOUR dreams come true, and may you enjoy this new issue of The Hollywood Sentinel.