The Brilliance of KIMBRA 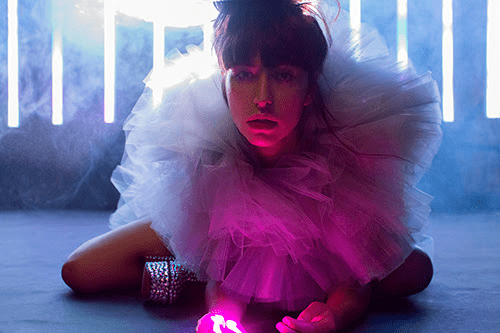 Rarely does there come along an artist such as KIMBRA.  Sincere, down to earth, intelligent, sophisticated, complex, brilliant, beautiful, talented, daring, and innovative in a world of imitation, Grammy Award winning KIMBRA has styles ranging from pop, jazz, blues, dance, acid house, rock, and beyond.

Seeing clips of KIMBRA perform live, you will soon discover what a genius this woman is; with not only perfect vocal control and an amazing, soulful, elegant voice, and a brilliant songwriter and performer, but also, as a live audio engineer, instantly dubbing and mixing her voice and beats in front of the crowd.

KIMBRA extends this innovative talent to her website, and now, her next video too, with a brilliant website where fans can create their own beats on their keyboard through the interactive site, record them, have them emailed back, and enter them to be considered for KIMBRA to mix into her next song, as well as taking video clip submissions from fans to create her next video. Meanwhile, referencing a unique bit of trivia concerning David Bowie, in her letter below.

In addition to staying in touch with her fans on social media like some artists do, with most having their assistants do this, KIMBRA uniquely types out personal letters to her fans, and has them emailed out directly to everyone on her email list, which is a nice touch of a kind gesture from this sweet, and genuine, great artist.

A letter from Kimbra to her fans:

So I am currently writing to you from Wellington, New Zealand (Aotearoa) where I am stepping into quite a new territory! Not in a landscape sense of course (NZ will always be my spiritual home) but I am starring in a movie out here! It’s a film that is set in my hometown of Hamilton (anyone out there from The Tron?!) and I play & perform a lot of the music in the film (which is made up of classic New Zealand songs that we grew up with) plus a little bit of dialogue, so it’s a new adventure, learning the ropes of a film set and learning so much, I’m all wide-eyed like my first day on a new job. When these sorts of opportunities come up I’m sometimes really good at coming up with a bunch of reasons to say no but it was liberating to realize the only reason that would hold me back from saying yes, is fear.

I’ve spoken a bit about jumping straight into your fears as a way to transcend them. Although acting isn’t completely foreign for me (it was in fact an early love of mine before music!), it’s out of my comfort zone and requires me to let go and serve the vision of the director as opposed to being very hands on as I am with my music videos. It’s such a good learning process, to be one instrument in a larger symphony. The movie is called Daffodils, not only will it have a bunch of amazing music which is performed throughout, but I think it’s gonna be a little tearjerker. And it’ll give you a VERY good insight into the New Zealand life aye bro! ;)

I get back to New York next week & I’m pretty excited to get back into some domestic life for a hot second before we begin another long run of dates. There are so many shows coming up & you’re the first to know ALL the new dates! Check them out!!

These shows are gonna be a blast!!

What an honour to tour with such amazing acts, BECK, ODESZA, SON LUX. Can’t wait to share the stage with these guys. All my upcoming dates are for sale at my WEBSITE!

It’s been a second since I announced the Hi Def Music Video Submission comp so I trust you creatives have been buzzing about making sweet art, I can’t wait to see them start coming through. REMEMBER – it can be just 10 seconds of the song if that’s the bit you love & have a visual idea for it! Don’t have to come with something for the whole song, ha!! Now that I’m working on a film set I recognize how much time goes into even one minute of footage so don’t burn out & just send me something short & sweet! The submissions will close on the day of album release (April 20)!!!

So, since you guys are working hard on making stuff, and your interest in my collaborative gestures mean so much to me, I thought I’d return the gesture by setting myself a challenge….. remember the Primal Heart Interactive WEBSITE? Remember the sweet beats you made by triggering audio samples form the SITE and making your own groove that you could share or have emailed to you? Well, I’ve decided to pick my favorites from the beats you made & make a new song out of the sweet new grooves you made using my sounds! I’m planning on editing up a bunch of them and creating a new lyrical / melodic piece to work over the beats you made. FUN RIGHT?! I love you guys and want to make you something special, can’t primrose it’ll be genius but I’m gonna try to make something dope and you’ve already done half the work! ha.

In terms of lyrical direction, I’m thinking of maybe even sampling words from the record itself on a random selection process and recreating sense (or nonsense) from the various jumbled words. I remember Bowie used to close his eyes and point at a word in the newspaper then repeat it multiple times until he had a random selection of words which would then turn into a sentence and eventually a somewhat psychedelic or incredibly mundane springboard to a new song! Haha. Brilliant.

As you know I released a new song and music video last month called “Version Of Me”. It’s really moved me to see how many people have been impacted by the lyric and the video. It was quite emotional to create but it makes it all worthwhile when I know have I reached someone going through something similar. It also helps that I worked with people i trust so deeply, it was such a safe environment to explore something so tender. Here’s a video to show you a little more of how the day went.

Well, I better get back to this movie set but I’m sending love to all of you who are following these emails and taking the Primal Heart journey with me. I can’t believe the album comes out next month! so soon!!! I have so much planned for you.x